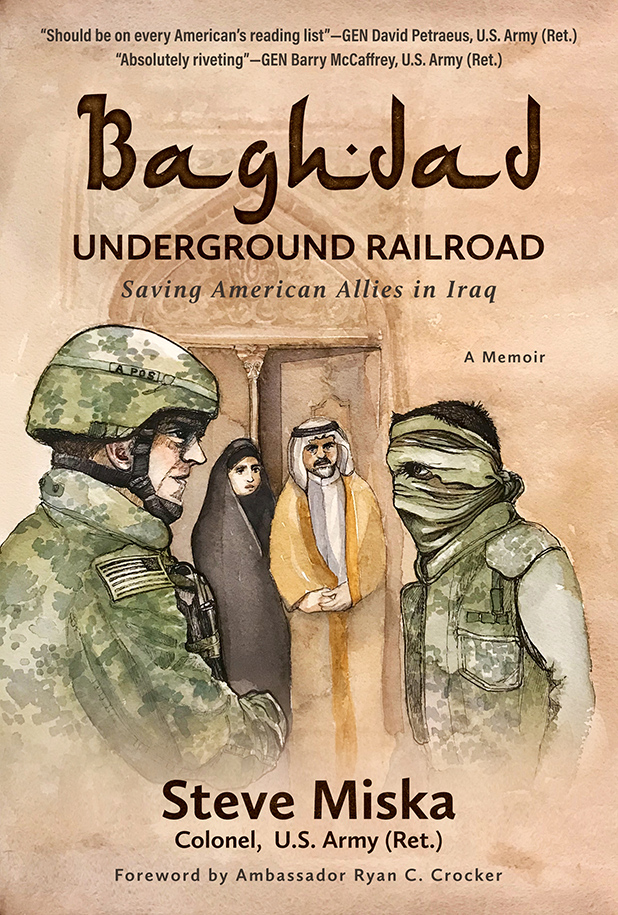 During the war’s worst fighting in 2006 and 2007, a handful of Iraqi interpreters put their lives on the line to help American troops. Families threatened, a bounty on their heads, ignored by the powers that be, they faced execution as collaborators with the enemy if they remained in their homeland. A Task Force Commander decides a promise made should be a promise kept.

After the murders of several Iraqi allies, Lt. Col Steve Miska decides to slice through the bureaucratic red tape to get interpreters to safety. His team creates the Baghdad Underground Railroad to get the “terps” and other allies out of the country to Jordan for their Embassy interviews. Soldiers also tap their own families in the United States to serve as sponsors to house and assist the new immigrants.

For the Iraqis, they face the struggle of adapting to a culture vastly different from their own. One of them even joins the U.S. Army and returns to Iraq as an American soldier.

In this compelling memoir that illustrates humanity and compassion in the midst of war, Steve Miska highlights the plight of local allies, who are essential to the American cause in foreign wars but are often left behind. He also offers an insider’s look at the complex and frustrating political reality of Iraq facing U.S. commanders and policymakers following the downfall of Saddam Hussein.